Do people still read newspapers? And who do we trust most to provide us with honest and accurate news?

In this article, we reveal new insights and perspectives into how we consume news in the UK. We surveyed 2,000 people from all around the country to discover their habits and preferences when it comes to consuming news.

Which news platform is the most popular?

Television is by far the UK's most favoured platform when it comes to getting up to date with the latest news. In our survey, 37% of people revealed that they get the majority of their news from watching TV. Ofcom’s most recent research also supports this finding, with their latest report stating that "television clearly remains central to people's news consumption"

The second most popular platform for news in the UK is social media, with many people getting the majority of their news from social networking sites. The less preferred platforms in the study were newspapers which accounted for 12.2% of people and well-known news websites, favoured by 19.2%.

The least popular of all appears to be Search Engines, with just 7.8% of people in the UK saying that search engines are their primary source for news.

How often do we buy newspapers?

National newspapers have undergone a significant (50%) decline over the last decade. According to the Department for Digital, Culture, Media & Sport's recent overview of the UK press market, national papers went from selling 11.5m copies a day in January 2008 to selling just 5.8m copies a day in January last year (2018). But how does this translate to how regularly we buy newspapers in the UK?

Our survey helped us to discover some surprising statistics relating to the number of people in the UK who still buy newspapers. The survey found that only 38% of people never buy newspapers, meaning that the vast majority (62%) still buy them at least a few times a year. 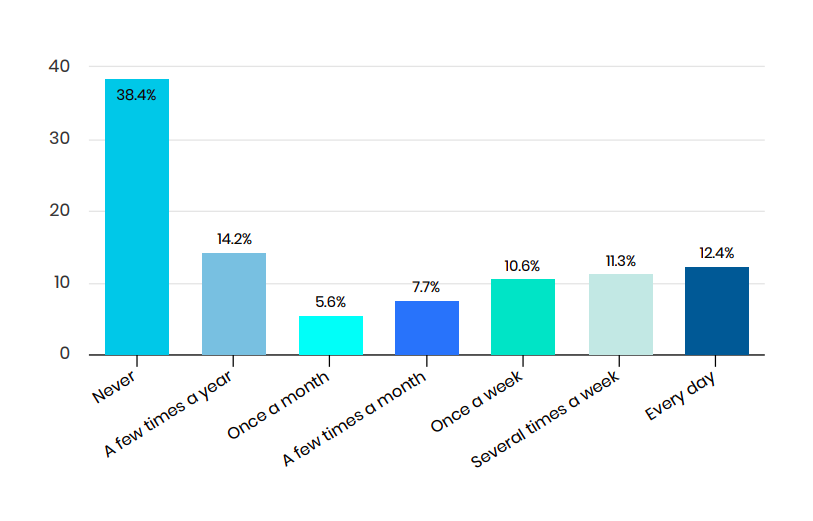 Our survey also found that men are almost twice as likely to buy newspapers every day than women. 16.4% of men disclosed that they buy newspapers daily, whereas just 8.5% of women said they did.

Which news outlets do we trust the most?

When asked ‘Which news outlets do you trust to deliver honest and accurate news?’ almost half of those surveyed said the BBC, followed by The Independent (29%) and Sky News (28%). Interestingly, more than 1 in 5 people in the UK do not trust any news outlets whatsoever.

The news outlets that were perceived as being the least reputable were mainly online-only publications. These included LadBible, Buzzfeed and Huffington Post. This could suggest that the UK has a preference for physical as opposed to digital news outlets when it comes to their perceptions of reliability and trust.

How do people from different parts of the UK like to consume their news?

Our study found that people from London are much more likely to buy newspapers at least a few times a year than those from any other part of the UK. This appears to have been the case for quite some time, with a YouGov study from 2013 stating that daily newspaper readership is higher in London than in any other UK region.

Our study also found that people in Northern Ireland are much more likely to buy a newspaper every day than those who live anywhere else in the United Kingdom.

Our data also suggests that people from London are big fans of receiving their news online, with 41.2% of those living in the city revealing that they read news online every single day. However, in other parts of the UK, such as Wales, less than a quarter of people get their daily news online.

“I prefer a physical item in my hand”

With recent developments in technology we now have the ability to get the most up-to-date information at just a click of a button. Our research has found that half of those aged 18-24 get the majority of their news from social media websites, with many others getting their news from the TV, news websites and via search engines. So why are so many people still spending their time and money getting their hands on newspapers? 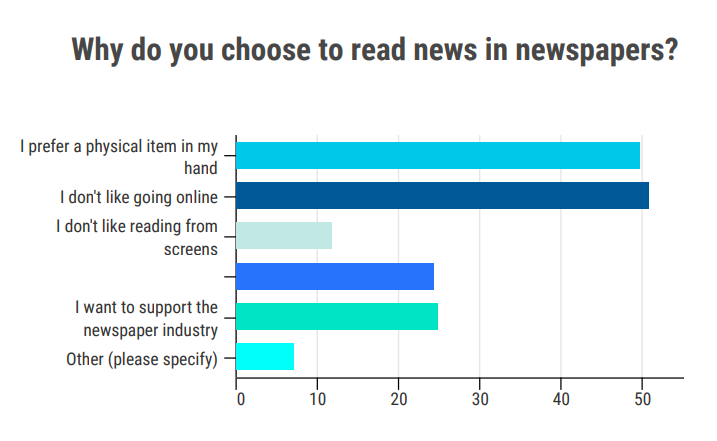 Other reasons people gave for why they choose to get their news from newspapers included: not liking going online (5.1%), not liking reading from screens (11.9%) and wanting to support the newspaper industry (24.9%).

We hope this article has provided some useful insights into how the UK consume their news in 2019.

How to capture media attention using a trending topic

How can hospitality businesses make the most of the media to help their recovery?